My GKB has just had a birthday so the kids all dubbed in and shouted him a trip to Palmerston on the Seasider train and I went with him :) It was a pleasant way to spend a winter's day.
We had a little while to wait before we could board the train once we arrived in Dunedin so we had a poke around the farmers market and then  listened to some young people busking outside the station. 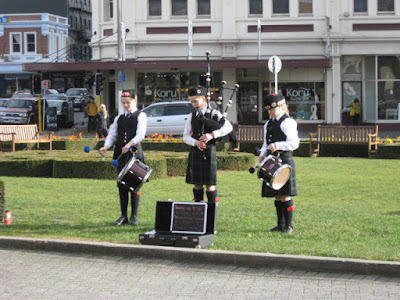 Eventually we were able to board the train and our journey began.
We had a nice young couple from Auckland sitting opposite us, they were doing some sightseeing before they headed back north in a couple of months time. They took this photo of us.

My GKB's family are from the Palmerston area, none left there any more, but he still feels a real connection. He spent a lot of time there as a boy. When we arrived he only had one thing in mind - one of McGregor's (world famous in Otago) mutton pies for his lunch.

I think he was a little bit disappointed as the pie as a bit dry. Mutton pies always used to be greasy, the fat would run out as you took a bite and run down your chin. People either hated them or loved them, I was in the first camp. So I had a large sausage roll :) 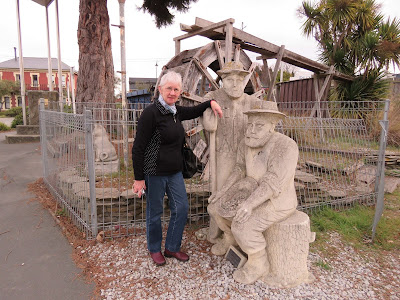 After lunch we took a stroll around the township before heading back to the train. On the way we stopped to chat with a couple of the local goldminers. A lovely day out and a thoughtful birthday present from the kids for their father.

That's it until next time,
enjoy your week.
Diana
Posted by doodles n daydreams at 20:07 5 comments: