I have just finished cleaning and tidying the room the 2 little boys use when they are here - for playing in, not sleeping. I found among other things, a bright red plate with what looked like someones science project growing in it, lurking under the couch. Anyway that is a job I have been putting off and it is now done - just looking at the mess was daunting, mainly toys scattered about amongst cushions and blankets but daunting all the same. It only took about 20 minutes when I finally got round to it.

What has this got to do with bunnies or gold you may ask? Well nothing really except that Easter has just been and gone and  I believe the Easter Bunny was very good to these two wee fellows :D) And Easter is a season of golden promise. 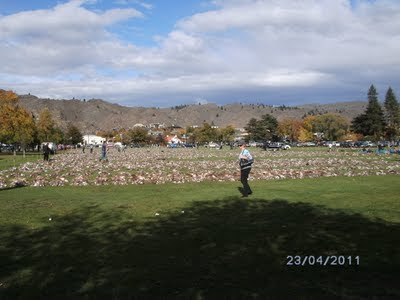 But we, the GKB and me, did happen to be in Central Otago when the big Easter bunny shoot was being judged in Alexandra and went to have a look at what all the fuss was about, not realizing really what we were walking into. We had wondered why we couldn't get a car park anywhere and had to park down a side street and could see a couple of marquees in the playing field so went to be nosy. Thousands (22,904 according to the paper) of bunnies lined up on the field waiting to be counted and judged. Probably hundreds of hares, lots of ferrets - I loved the creamy brown coats on some of them - six turkeys and a goat. And a little black rabbit ...


The presentations were being done as we walked through and a young bloke from Aussie was getting a bit of stick for not being able to understand proper English, but it was all in good fun and he got a prize for being the competitor who had travelled furthest to compete.

I know a few young blokes in Aussie who would probably love to make up a part of team sometime in the future, it's real man stuff, helps to keep the rabbit population under control in a small way. Oh did I mention there were also several dozen of those Aussie pest, the 'possum among the count? 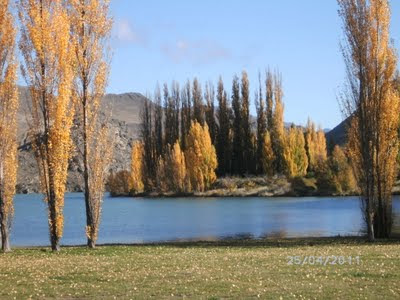 And Dunstan Gold. Beautiful autumn colours on the poplar trees. I love these trees. Although close up they are not very inspiring to look at and you would probably never pick them for a landscaping project the wow factor in the autumn couldn't be any better. If you are lucky to see them en masse in the autumn, and if you are lucky enough to see them from above and from a distance they are the most glorious trees about. They turn bright golden before the leaves drop. To me they look like golden fingers stretching to the heavens and it is not hard to believe that God's creation is reaching up to Him in worship. Every branch is pointing skywards, each little baby branch is reaching skyward, the leaves all reach to the sky - absolutely beautiful.

Strangely this year, and I guess it has been such a funny season, some of the trees were bare of leaves at the top, were golden in the middle and still had some green growth at the bottom, but still lovely in a quirky way.

So that is my bunnies and gold story from my Easter break away in Cromwell in Central Otago. (An extra week would have been good, oh well...)
Posted by doodles n daydreams at 00:43 2 comments: