Earlier in the week we were tracking cyclone Debbie off the north Queensland coast of Australia. She was due to make land just north of where my sisters and their families live in Mackay. Once she landed she became a slow moving category 4 storm bordering on category 5. Luckily none of our families were in the evacuation zone and had no damage to their homes either. So fortunate. One sister had a tree fall in the yard, missing the house by a few feet and the other only has water lying around. The nurse managed to get to work and did some long shifts while the other was too far out and stayed over with her son for the duration and had cuddles with the little grandkids and the four legged, furry family members. Now it is the people further south who are dealing with floods after the rain in the aftermath of the storm. 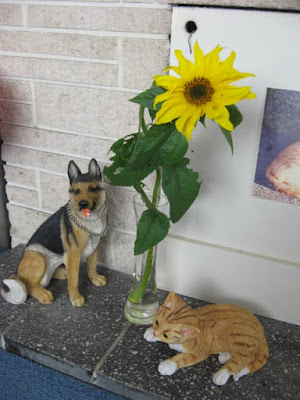 I went down the back of my yard a few days ago and saw a lovely bright yellow sunflower in full bloom. Unfortunately it was lying flat on the ground and as my GKB was about to start mowing the lawns I thought it might be wise to cut it and bring it inside. It's amazing how things get accidentally pruned by the lawn mower when you're not looking. Anyway I am enjoying it in my sitting room now :) 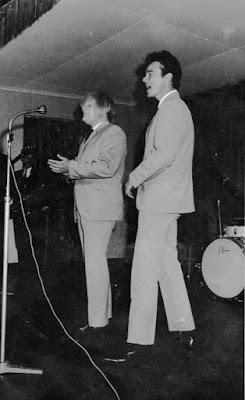 What you come across when you are sorting through old photos. This is a picture of my GKB and our best man in the days before I met him. They toured the country as a comedy mime act, The Teen Tones, performing such songs as My boomerang won't come back and Come outside. After we were all married it was a good way of supplementing the wages, doing evening and weekend gigs as well as weddings and 21st's. Eventually we moved towns and as families we lost touch with each other, sadly. 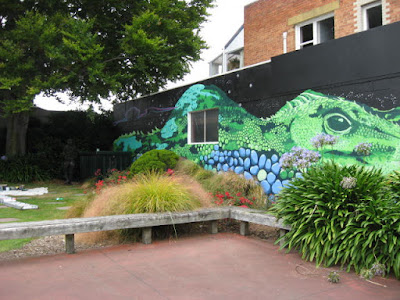 A new mural on a wall in town. A taniwha*. (A water monster of Maori legend).
This is a picture of the taniwha from local legend and I have taken an excerpt from Wikipedia to tell the story.

W.R. Kirk** repeated the later story of a taniwha (water-monster), the "familiar spirit or guardian of Te Rakitaounere (also given as Te Rakitauneke) a famous chief and warrior" who lost his master about the Dunedin hills, slithered down the Silverstream, 'Whaka-ehu', and 'lay down and left a hollow Te Konika o te Matamata' on the site of Mosgiel. The taniwha (named Matamata) wriggled down the Taieri, making its tortuous course, and when he died became the seaboard hills, including Saddle Hill.
*taniwha
ˈtanɪwɑː,ˈtanɪfa/
noun
noun: taniwha; plural noun: taniwha; plural noun: taniwhas
**W.R. Kirk is a local author who wrote a book about the Taieri area - Pulse of the Plain, A History of Mosgiel. 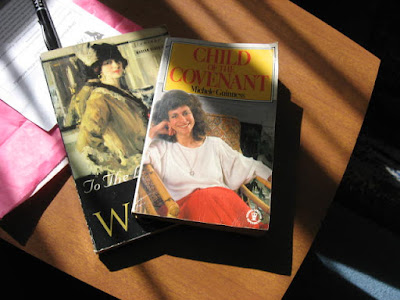 And what am I reading at the moment? To the Lighthouse by Virginia Woolf. Why do I do it? The prose is so tedious, so hard to read and enjoy but with just enough of a hook to keep you reading. It was the same last year when I was reading Portrait of a Lady. Same style of writing, nearly one hundred years since these books were written and writing has changed so much. This is supposedly her best book so I don't think I'll be looking for another one.
Still I have just finished reading Child of the Covenant by Michele Guinness. So interesting, her story of growing up in a traditional Jewish household to her becoming the wife of an Anglican clergyman. I found it quite a fascinating read.

And that is my five
this week for
Five on Friday
Posted by doodles n daydreams at 17:53