In March my GKB and I went up to Wellington for a long weekend
- conference for me, R&R for him. Wellington is the capital city of our fair land and home to the Museum of New Zealand Te Papa Tongarewa. It is known locally, as in throughout the country, as Te Papa. Te Papa Tongarewa translates from the Maori to 'Container of Treasures'. We decided we had to visit as there were two exhibitions we particularly wanted to see, so while I conferenced my GKB went sight seeing. Later we visited Te Papa together. Twice.

The second time we were there to see The Terracotta Warriors from China. This was really fascinating once we got in. Entry was once an hour and you bought your tickets earlier. We hadn't realized how the system worked, bought our tickets and then had to wait over half an hour till we could go in. Never mind, we had a coffee and went back and discovered the queue was very long waiting to go in. Well worth it though. 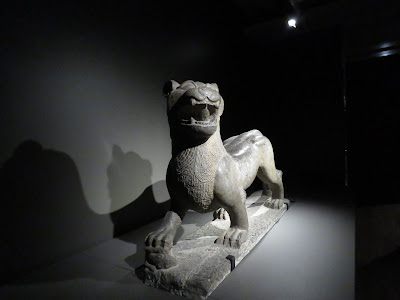 One of the lions on guard outside the exhibition.
She has a cub under her foot and represents nurture.
There was a male lion on the opposite of the entrance,
also on guard. 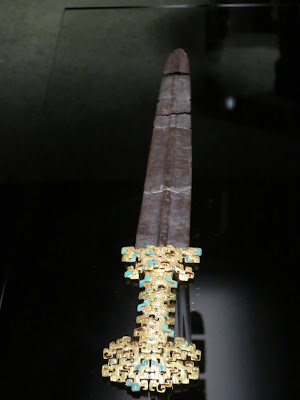 There were a lot of artifacts on display including this ceremonial dagger. The handle was gold inlaid with turquoise. There was one display which we missed altogether as the people were several deep and moving extremely slowly...and we had a plane to catch! I'm still curious as to what they all found so fascinating though. 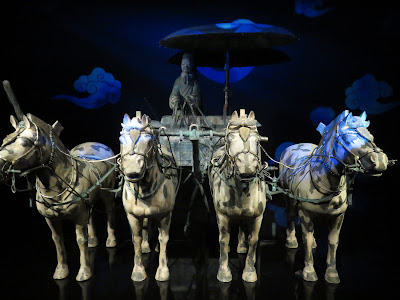 This is a half size replica of the carriage, horses
and driver who would transport the emperor around
his celestial realms in the afterlife. The attention to
detail was amazing, everything was very lifelike. 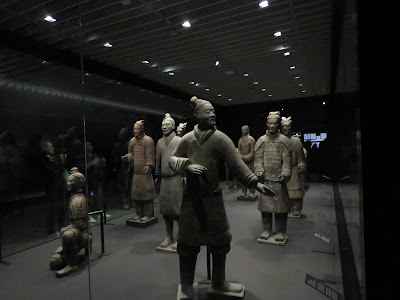 And finally we reached the warriors, ten in all approx. 2 metres tall, with two full size horses. All made of terracotta. They ranged from the lowly foot soldier at the front through the different ranks and then two generals. One in battle dress, one in formal dress. You could see where they had been holding weapons but because of their age these had rotted away being made of wood. Can I say again, I found it amazing. If ever you get the chance to see any part of this treasure, please do.
If you click on the blue print near the top of the post
it will take you to links with more info if you're interested.

I'm so glad we made the effort to go, we knew we wouldn't have another chance as they all head back to China in a few days.
Then we got our bags out of the check-in, crossed the road and caught a taxi and headed to the airport. And that's another story :)

I said at the top this was our second visit to the museum
and I'll tell you about the first one a bit later.


Have a great week
Diana
Joining Deb over at Breathing in Grace
to share in Friday foto friends
Posted by doodles n daydreams at 21:41