Saturday night found us all gathered at the Recreation Hotel for a celebration dinner. We had been able to go in earlier in the day and put Easter eggs at each place setting and although it doesn't seem so in the picture, it looked quite pretty. One sis had wrapped several eggs in cellophane bags and tied them with pretty curling ribbon, enough for a bag each for each person there. With wine and soft drinks on the table it added to the effect. 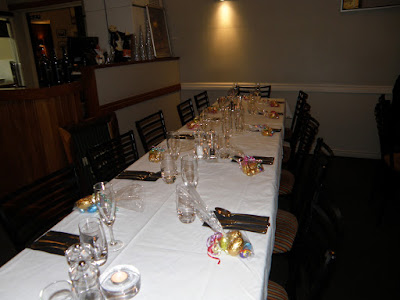 We started with an entree served at the tables followed by a buffet main course. This meant that those with special dietary requirements could have what they needed. Once again when
it came to desserts we were served at the table. The food was delicious but it was a shame that the noise from the open kitchen made it difficult for people to hear our eldest cousin when he gave a tribute to our grandparents and then made the toasts. Luckily he had written it out and we were able to get a copy posted on our facebook page. 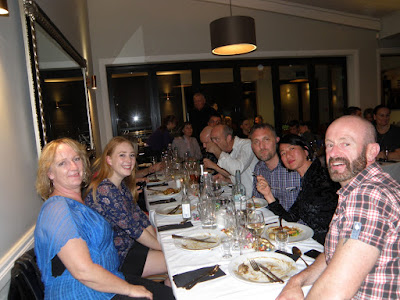 Immediately after dinner was over we cut the reunion cake. We would have left it a bit later as some people were still eating dessert but our Aunty was ready for home and we really wanted her to do the honours. The cake was made by my eldest grandson, very decadent, layered mud cake filled with chocolate ganache and iced with chocolate. Once again the theme was flags and daffodils, all made with chocolate - well the ones on the cake were anyway :) 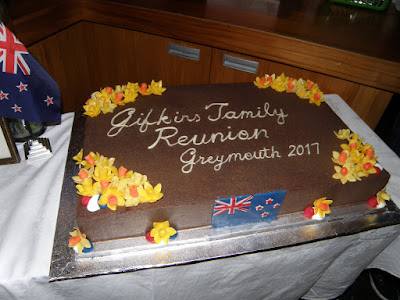 Just after it was cut there was an accident with a wine glass and one end of the cake was covered with wine and broken glass. Luckily it was a big cake and we were able to salvage most of it but the waitress who caused it was very upset as she was new at the job. 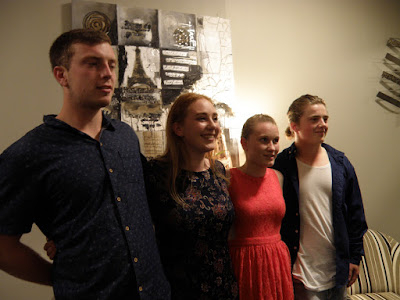 A good time was had by all and not a cross word was heard. The little kids were all marvellous, and cousins of all ages caught up with each other. The four in the picture above all live in the same city but had to travel to the Coast to visit with each other :) 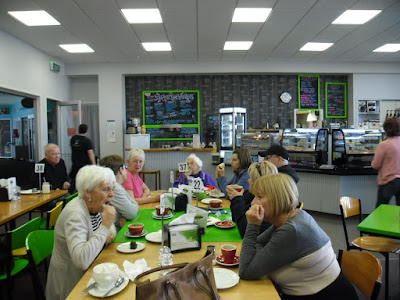 On Sunday lunch time we had a farewell at one of the local cafes, "The Gap". Sharon, the owner, was so obliging. When I rang her to confirm our booking it was the first she had heard about us wanting to use her cafe to say our farewells. She had bought the business since we booked and I rang her less than a week out from the event. But she reserved space and set up seating for 30 which worked really well as we arrived in groups of 10 to 20 and there was plenty of room for everyone at any one time :) The staff were very friendly and obliging as we were there on a very busy holiday weekend.

On Sunday afternoon those of us who weren't travelling did some exploring, my GKB and I went to Punakaiki to the blow holes but I'll write about that another time as it really warrants it's own post.

One thing we of the older generation find interesting is that our families enjoyed themselves so much that they all want to go back for holidays and do some more exploring. A real positive spin off as most of them have shown no interest up until now :)

Joining in Five on Friday
over at FAST
Diana
Posted by doodles n daydreams at 16:12