Well that was a weekend and a half...but we got through it :)
Queen's Birthday Weekend happens in June, and you guessed it, we commemorate the Queen's birthday. A long weekend, Friday through until Monday.
*************
It started off with our expectant mother going into labour late on Thursday and giving birth to a lusty son on Friday via emergency C section. He weighed in at 9lb 1oz and is named Arlo. We haven't been to see him yet as, although he is doing well, mother is a bit overwhelmed and isn't up to visitors. So we'll put it off for a few days and go when she's ready. Sorry no photo's, you'll have to take my word for it that he's a good lookin' dude!
*************
On Friday night I helped my daughter decorate the church hall for a baby shower. Yes, we have another little person joining the family in August :) A little girl this time. So it was a pink theme.
Very traditional. 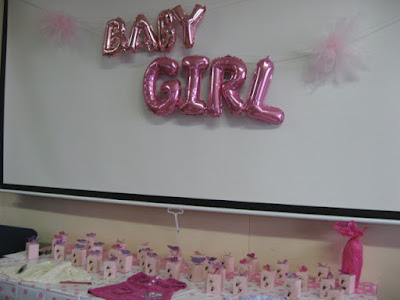 Chloe lives in the North Island. She came down for the holiday weekend so her Mum decided a shower would be nice for her,
and for her old girlfriends. 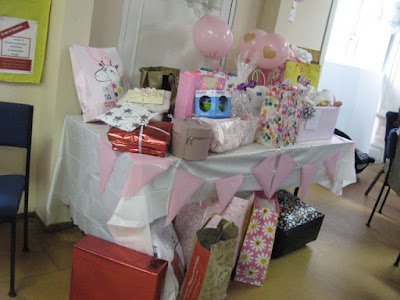 She was given some beautiful gifts, the girls and the family did her proud :) Someone was even thoughtful enough to give her a big pink fluffy dressing gown for herself. 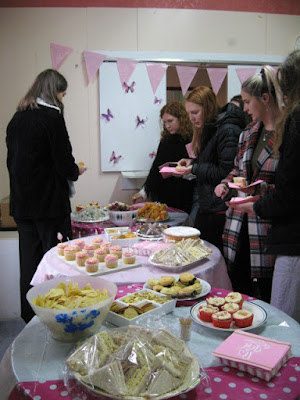 Her aunties and grandma's provided most of the afternoon
tea and it was a lovely spread. It was also very cold with snow threatening which is why we are all dressed in our winter woolies. 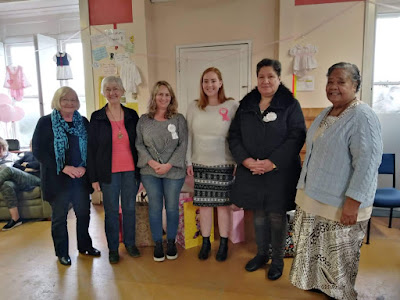 We managed to get a photo of Chloe with all the grandma's.
Left to right we have two great grandma's, grandma, mum to be, grandma and great grandma.

As you can see we decorated with little baby outfits and dresses - from back when my girls were babies and toddlers.
I didn't know they had kept them.

The only trouble with decorating is that it all needs undoing but the young girls all stayed behind and helped. I thought that was a really nice gesture.
*************
Now it's Tuesday evening and I've spent the day away at
the funeral of a friend. He was only in his late 60's
and his death was unexpected. But it was a joyful funeral,
he had a deep faith and has gone home to be with his Lord.

As I said, it's been quite a weekend, but we got there.
So, have a good week folks,
until next time,
Diana

Posted by doodles n daydreams at 21:41