Oh, their bags are packed...

...and they're well on the way.
In fact they must almost be back in Christchurch
to catch the flight back to Sydney tomorrow.
Then they will separate and head back to
their homes in different parts of the country.
Yes, my youngest sister and her family have been and gone -
doesn't time go quickly when you don't want it to?
We had a great visit, they stayed with my little mother
so she was always invited to join them on their excursions.
Sometimes she went with them and sometimes not

The day we all went into the Warehouse she decided
to join us. We had a good day out and enjoyed lunch
at Kelly's Cafe while we were there. On the way home
I suggested we call in to my youngest daughter's home
so the wee fellow could play with the kids for a while.

He is only four and had been so good.
So the boys played and we all relaxed
and had a catchup over coffee until it was
time to head home for tea. It is so nice not to
have deadlines or timetables to be adhering to.

Sis and her daughter took turns at the cooking and I think
little Mother cooked one day when she stayed home.
As on this day when we had a family gathering at the park.
As it's school holidays we decided to have lunch at the park -
pizzas and playtime I called it. $5.00 pizzas didn't set us
back too much and we all took some home afterwards.
A nice easy day out for kids and adults alike. 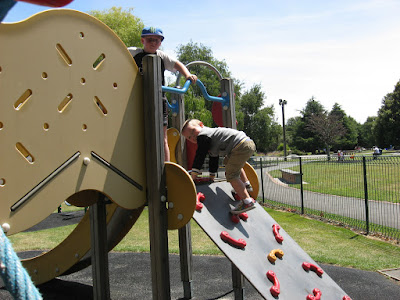 climbing...
And of course there was lots of playing.
The only fly in the ointment, so to speak,
was a bee sting. And that happened as we
were leaving. Maybe next time the child
will keep his shoes on when he's told to :)


A couple of nights ago we went out for dinner
with my brother and his partner and his two sons.
We don't see a lot of them so it was good to have
a catchup with them as well. The meals were very big,
well worth what we paid, and I ate far too much.
I should have stopped at the main but I didn't.
I had dessert! It was big, decadent and too much,
but I ate it anyway. All in all a lovely night out.

I went for a long walk the next day, with the odd bit
of gentle jogging thrown in for good measure.

Looking back I see we gathered a lot over food, I think
that is a good way to socialise, over the common meal.

I shall miss them for a while but look forward
to seeing my other sister in a few weeks time - when we
shall have a very different sort of holiday with her.

joining Martha at:
Martha's Favorites
and Stephanie at:
roses of inspiration

That's it for this week
or for a few days anyway.
Keep well until next time,
Diana

Posted by doodles n daydreams at 19:06