It's been a bit of a wet couple of days, not too heavy,
just wet enough to be a nuisance.
So today once it stopped I went out for a walk. 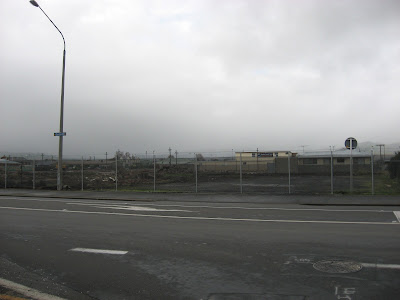 This site once housed a school with a playground,
a large hall, a small hall,
a house and netball courts.
Before long it will be occupied by a large supermarket.
I wonder what's going to happen to their old one
or whether they'll run both of them.
That would give us three supermarkets.

We are a small provincial town with a city
just 20 minutes away by car.
I don't know that we could sustain 3 supermarkets to be honest.
But time will tell, and they may demolish the old building.

***************************
An update for those of you who asked.
My hubby had a good report when
he went to the hospital for his check up.
He's still got a way to go but hopefully
by Christmas the clot will be gone entirely.
He is much better now that he's over the initial shock
of it all and has started doing the things he enjoys again,
like darts. He still can't get down to the river
to fish but that'll come.
Many thanks for your concern.

Until next time,
Diana
Posted by doodles n daydreams at 17:36