Just touching base with everyone to let you
know I am still alive and kicking.

Last night my youngest grand daughter Chloe got in touch to see if we wanted to  join her in a girls only afternoon tea: coffee and brownies. So my little mother and I went out with her to a nice cafe/bar and  had a very relaxing afternoon out. Two of the 'girls' couldn't come, my daughter and her youngest daughter but we were still a nice little party. This is the first time Mum has been out socially for a long time, months in fact. She has been back in hospital since last time I posted and they have put one of the stents in. What a big difference it has made to her but we are still awaiting the main op. and so she is still staying with us. It was nice to go out and not be visiting the hospital for a change :)
My little mother is tired tonight though.

On Wednesday night my middle grandson, Jack, had his year 8 formal. Girls a dress and boys trousers, shirts and tie. That would be a novelty for the boys in particular I think and possibly for some of the girls as well :) They have been practicing some ballroom dancing for several weeks now as well as some more fun stuff.
The photo below is Jack all scrubbed up and ready to dance (reluctantly in his case). This is his final year at primary school and next year he will travel into the city to attend high school, growing up and starting a new phase in his life. They are all growing up so quickly, I don't know where the time is going to, sigh. 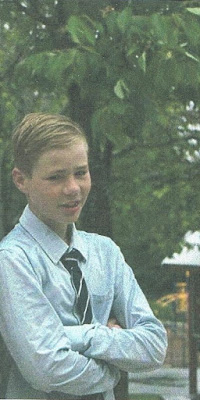 Sorry about the quality of the photo, it has been through many incarnations before I managed to get this pic on the page.