letting off some steam

Sorry folks, I just have to let off a little steam!
I sat down to write something quite different but
that will keep till later.

Last night I was working (I work in a rest home)
and went to answer one of our residents call bell.
She was in quite a frantic state, had just answered her phone
and couldn't make head or tail of what was going on.
I could hear someone talking to her in a really persistent manner,
in a foreign accent and alarm bells started ringing.
It was one of those ratbag computer hackers trying to
get her to turn on her computer.
Being 99 and in a rest home and not owning a computer
she couldn't work out what was going on and getting in a real tizz.
I'm afraid I saw red and took the phone and let rip.
I sent him packing with a flea in his ear!
(And I didn't swear).
Now the poor old soul is scared to answer her phone in the evening.
These people have got no idea of the damage they do,
not just to peoples computers or finances but emotionally
- I guess they don't care either, unfortunately. 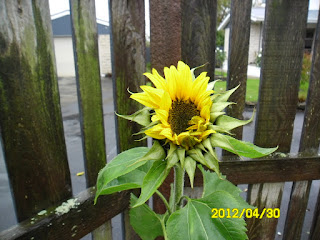 On a happier note, in February I planted a couple of
sunflower seeds,
far too late for them to do anything major,
I really thought it might already be too cool for them to
germinate but was hopeful.
Well they did germinate and they grew and reached toward the sun. Then we had a week or so of cold weather.
I thought that was the end of them, but no.
Autumn turned out to be beautiful and warm.
The sunflowers grew and grew,
one outdoing the efforts of the other.
The photo above is the one which opened and bloomed,
and even though we have now had a dusting
of snow on the hills it is still standing tall.
Its mate is about 8 inches shorter and the day before the snow it was just starting to open - I haven't been down the yard to have a look at it since, but I must soon.
They haven't reached their full height, but just to have made it to the height they are has really amazed me.

Isn't life grand on the whole.

Posted by doodles n daydreams at 13:01