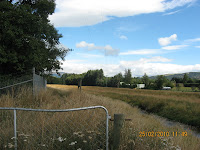 I took a wander down the banks of the Silverstream today, there was a bit of a breeze blowing but it wasn't unpleasant, reasonably warm in fact. Had to carry my hat though as the breeze kept snatching it from my head and playing with it. I took the left side of the bank after I had gone through the gate - and closed it after me with the hook. A lot of people don't seem to realise the farmers run stock on it at times. That would be an interesting sight, woolly sheep wandering down the road and into peoples gardens. None there today though.


I went further than I have been before and could have kept on going, it was pleasant walking but thought I should turn back when I got down to the stand of gum trees because had to walk back into the wind. It seemed to be further going back for some strange reason...as I said I went further than I had been before past the macrocarpas along the track where the sheep were sheltering with their lambs from the sun and wind. With a large brown horse to keep them company. Then I decided I could go on to the next wind break a paddock away, it was a large stand of gum trees, or widow makers as I sometimes think of them. Quite magnificent though.


Under the bridge was a bit of graffiti, or maybe I should call it tagging as it was quite good, not that I stopped to admire it but it wasn't just mindless scribbling. The branches and logs had built up again from the last lot of floods, some easy firewood for some enterprising person.


Saw ducks on the water and on the wing - oh I saw some gorgeous ducklings waddling along the street a couple of days ago with both Mum and Dad in tow. I have never seen that before, I wished I had my camera, Dad doesn't usually do the domestic thing once the ducklings are born. Cute.


Passed a couple of dogs out and about teaching their owners how to throw sticks and balls and a couple just out for the pleasure of it, like me. People, that is!
Lots of song birds about as well, I could hear them making joyful noises to the heavens, they were all around in the trees but I couldn't see even one, they were well camouflaged.
So a really nice wander out in nature again, much preferable to the city sidewalks if you can do it.

Posted by doodles n daydreams at 23:25