It was our 49th wedding anniversary so my GKB and I decided to have a weekend away. We packed the car up and headed south to Invercargill. We left about mid morning and as it's only a 3-4 hour drive, depending on how many stops you make, we were there in good time. After we'd booked into our motel we decided to take a drive out to Bluff where we lived for a couple of years early on in our marriage. Our two youngest kids were born while we were living here. 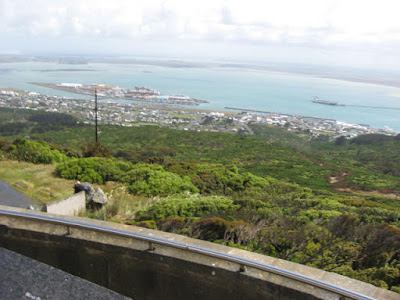 Bluff Harbour from the lookout on Bluff Hill
We only had a quick look around as there was a cold wind blowing, but we did go up to where we once owned a section to see whether it had been built on at all. We were interested to see that none of the sections available back then had houses on them. On our way back we called in to the new K Mart on the outskirts of the city. Twice the size of the one we have up here. There is a lot of building happening there just now, it'll be interesting to see what the cityscape looks like in a years time. 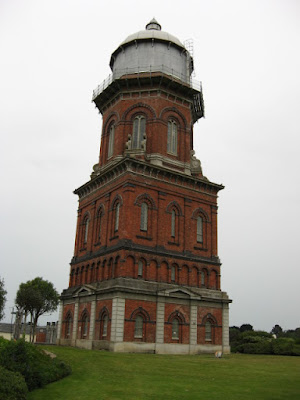 Across the road from our motels was a large water tower that was once the town water supply. It is quite an impressive building and looks even more impressive when lit up at night. 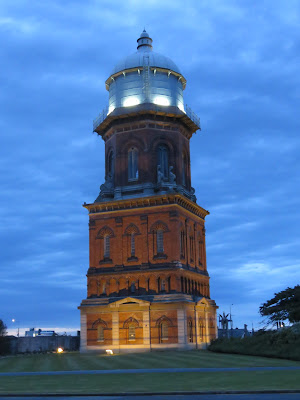 Built in 1898 it provided the city with it's first pressurised water supply. Unfortunately you can't go inside because it needs to have work done to bring it up to earthquake standard.

The next day dawned cool and with quite a brisk wind, so we dressed up warmly and headed to the Transport Museum, one of the reasons we had gone down there. I won't write about it here as it deserves a post of it's own.

After lunch we decided to go to Riverton, a seaside fishing port. When we lived here I'd only been once and was surprised at how far it was out of town and it also struck me how much prettier this port was than Bluff. It was a pleasant drive through farming country and then around little bays on the coast. Although it was still overcast it had warmed up considerably, enough for people to be out swimming, surfing and boogie boarding. 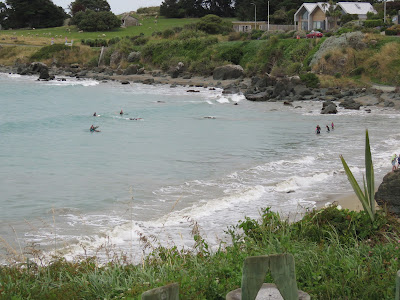 After a drive and look around we had a nice afternoon tea at a little 70's style cafe and headed back to town after an enjoyable day out.
And I'll finish there,
so until next time,
Diana
Posted by doodles n daydreams at 18:13