The phone rang about mid morning. I had won a hamper at the local pharmacy in a raffle for the Cancer Society. I'd totally forgotten I'd bought a ticket so it was a lovely surprise. I really was only thinking of it as a donation. I will have to share it, there is so much there but I'm sure between all the girls in the family we will soon sort it out :) 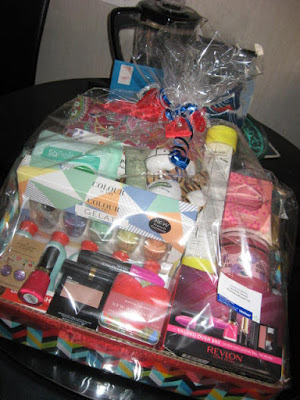 Later in the day my daughter called in. She had been given sausages, cream cheese, fresh milk and a tray of  quail eggs - all off a farm. There's too much here for me Mum, do you want some?  So of course I said yes. Later my son arrived home and he had been given samples of honey and barbecue sauce to bring home. Yum :)
We had the sausages for tea and DIL has been making cheese cake to beat the band. It is all so delicious. 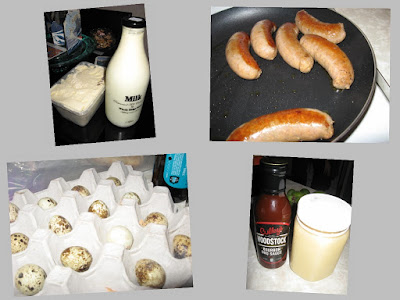 To finish the day off there was a beautiful double rainbow
over the town. I'm afraid I didn't get a very good picture
of it as it was a very cold day and starting to rain again.
It's hard to see the second bow but I promise if you look hard enough you will see it. 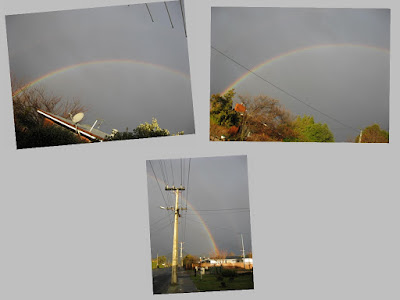 *******************
A little bit of an update on what is happening with my wee Mum.
She is still awaiting surgery but her local referring surgeon is so disgusted with the treatment she has had (or lack of it) up 'til now  that he has referred her to another hospital which has also started doing the procedure she needs. We have already heard from them and are now awaiting a date once more but it should come in the next few weeks. Mum has been getting so frustrated at times with not knowing what is going on but now is feeling a lot more positive and her general health seems to be better. Thank you to all who have prayed for her and asked about her. We appreciate you all :)

Posted by doodles n daydreams at 21:43