Several of you asked about the relevance of the manikins at the entrance to the Pike River Mine in my last post. Below is an excerpt from Wikipedia explaining about the explosions that occurred at the mine in Nov. 2010. I've written a bit of an update further down.


The Pike River Mine disaster was a coal mining accident that began on 19 November 2010 in the Pike River Mine, 46 kilometres (29 mi) northeast of Greymouth, in the West Coast region of New Zealand's South Island. A methane explosion occurred in the mine at approximately 3:44 pm (NZDT, UTC+13). At the time of the explosion 31 miners and contractors were present in the mine. Two miners managed to walk from the mine; they were treated for moderate injuries and released from Greymouth Hospital the next day. The remaining 16 miners and 13 contractors,[2] often referred to as the twenty-nine,[3] were believed to be at least 1,500 metres (4,900 ft) from the mine's entrance.[4]
Following a second explosion on 24 November at 2:37 pm, the 29 remaining men were believed by police to be dead.[5] Police Superintendent Gary Knowles, officer in command of the rescue operation (Operation Pike) said he believed that "based on that explosion, no one survived."[6] A third explosion occurred at 3:39 pm on 26 November 2010,[7] and a fourth explosion occurred just before 2 pm on 28 November 2010.[8] According to the new mine owner, Solid Energy, the bodies of the 29 miners who died there may never be recovered. 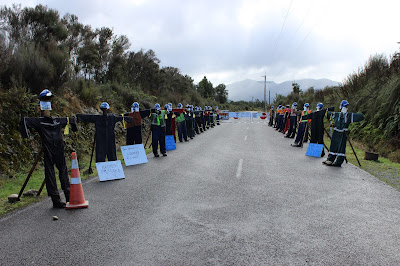 It was a very tragic time for the people of the coast which is a relatively small community with most people probably knowing someone concerned in the disaster. The families of the miners have been campaigning ever since to have the remains of their men brought out so they could be given decent burials but the government hasn't allowed that to happen. They said the mine had to be sealed up without anyone being able to go in to see if it was even possible to do. The families put up the 29 manikins to remind the drivers of vehicles, private and commercial but especially those employed to do the sealing, that there are still the remains of 29 men waiting be brought out. Although I haven't seen them myself I believe it is quite an eerie sight (my brother's words, his photo) and quite an emotional place to be. 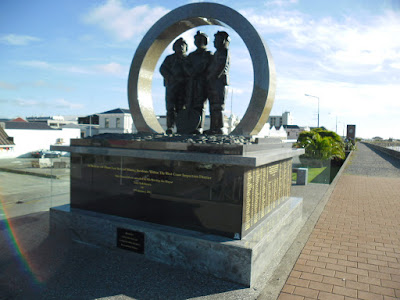 Just after we had been there at Easter there was a stay put on the sealing which gave the families time to breathe and regroup so
to speak. Tonight on the news we learnt that new footage
from inside the mine has been released and it looks like the
area where the men were thought to have been may not have
been affected by fire as was first thought. So now we wait and
see what happens. Personally I think they should go in and have
a look and maybe bring about some sort of closure for everyone, not only the families but everyone around the country.
According to a recent poll 39% of the people agree with me.
Posted by doodles n daydreams at 19:24