We had a family gathering today down at Port Chalmers. A couple of birthdays were being celebrated but mainly it was to welcome our nephew and his family home. He has been living and working in China for 20 years. He met his wife there and has a lovely little family. They have been home on holiday  several times but this time is for good.
In April our son will also arrive home for good with his wife. He has been living and working in Japan for 9 years and met his wife while there as well. They have also been home a couple of times on holiday. We're all looking forward to their arrival. 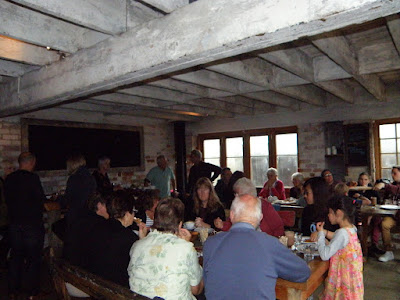 The gathering was held in an old building, now part of a cafe/restaurant but at the back of the property. The front shop was originally a fishmongers but my GKB couldn't quite recall what this building was. Anyway the owner has stripped it back to the original brick and beams (it looks like some of the beams have been replaced though) and it has a lot of character, a great place for a small get together like ours. 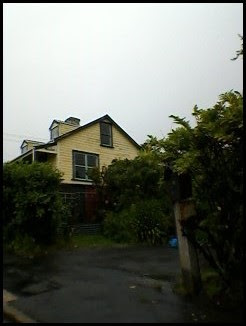 On our way home we thought we would take a quick detour and have a look at the first home we had together after we married.
It's looking quite a lot more run down, sadly, but it is over 40 years since we lived there and I am always surprised that it is still standing. It was the first house ever built in the area so is probably well over 150 years old. I used to love sitting on the front  verandah with my morning tea, I could see over to the harbour and it was so calm and peaceful with the bush behind. Lots of birdsong :) 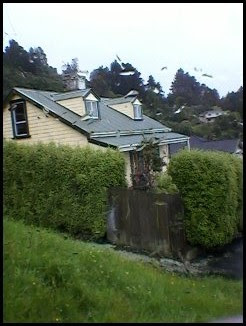 As you can see, we are still having a wet, grey, dreary summer :) and have gale force winds forecast for tonight. So we'll be battening down the hatches before we retire for the night.

Posted by doodles n daydreams at 18:53