Finally - the jigsaw is finished!
I almost gave up about halfway through
when none of the pieces fitted together :)
But I decided that a few bits of coloured cardboard
weren't going to beat me, so I kept at it.
In all it took six weeks!
I said I thought it would take all winter,
well it took half the winter. 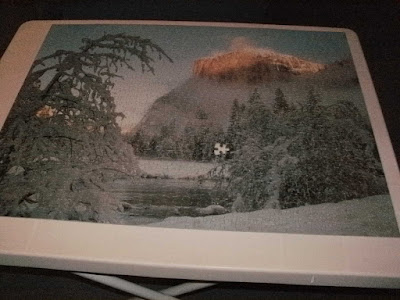 There is one piece missing but my daughter,
who owns it, didn't think that was too bad
as she bought it about thirty years ago.

One day this old fella decided to give me a hand.
I was worried he would leap off and take it with him,
but no, he just sat and inspected it, then
slowly stepped onto the couch and went to sleep.

Do you remember Mack, my grand daughter's wee Chihuahua?
He is finally out of his cage and walking again.
It was a long three months for him and everyone looking after him.
He still has to be careful, try telling that to a dog
who has been locked up for so long. I'm pleased all is well.

Now this same grand daughter has just become engaged :)
Her and her beau make a really nice couple
and we are thrilled for them. So I need to go shopping
for a nice engagement present for them.
Not easy as they have been living together for
a couple of years now, but I will find something. 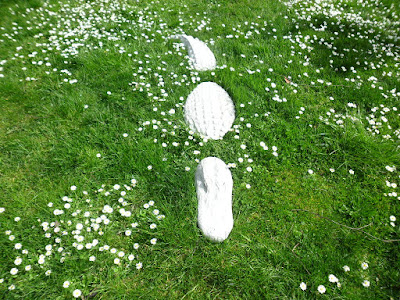 Eldest daughter is moving house, she going into a smaller place because it will just be her at home before too long.
What has a crocodile got to do with that you may well ask?
Well I don't know whether there is any lawn at
the new place and she loves this piece of garden art.
But knowing her she will find a home for it,
she's much more creative than I am. 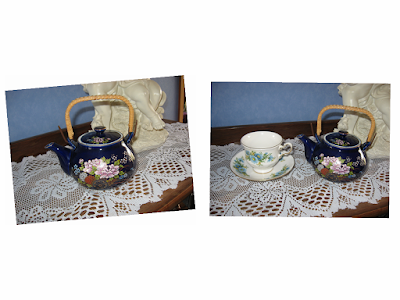 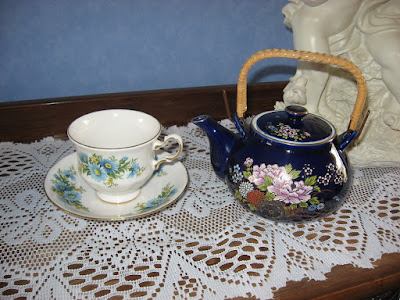 I haven't joined Martha at Tea Cup Tuesday
for a while so I wanted to today.
The tea pot is made in Japan and was a gift.
The tea cup is Queen Anne bone china,
quite a pretty cup with the dainty blue daisy pattern.
It once belonged to my middle sister who left it
with me when she moved across the ditch to Aussie.
I have one or two others she left as well
and I will show you them another time.

Joining Martha at:
Tea Cup Tuesday
and Stephanie at:
roses of inspiration

That's it for today.
Have a lovely week
and I'll see you again soon.
Diana

Posted by doodles n daydreams at 11:28