a nice cosy day in 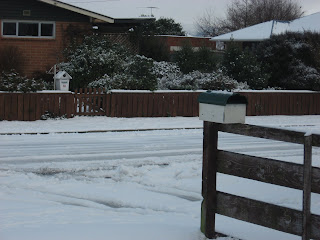 Well we've had our first decent dump of snow for several years and it was really quite lovely. I know in other parts of the world snow is an every winter occurrence, but not here. We might get a light dusting that disappears as quickly as it comes, but to have snow that actually lies on the ground and disrupts the city only happens every few years. We see it on the top of Maungatua, and around the
Silverpeaks, and we feel the effects of it in the wind chill other winters.
Anyway, on Sunday night the forecast wasn't good, snow down to 200 metres, which is us. As dusk fell there was a light dusting on the lawn and on the bushes, nothing settled on the road. The wind blew a gale and the snow kept falling, the temperature kept dropping as the evening went on and the heat pump was turned way up high, - we, the GKB and me,  don't like being cold! 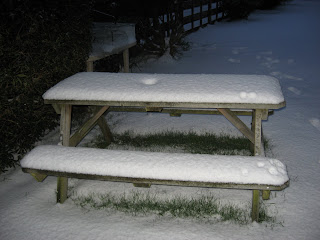 On Monday morning the GKB got up at his usual time, which is 3 or 4 hours earlier than me, to get ready for work. Turned on the radio to find that the roads were closed and that everyone was being asked to stay at home unless it was essential to travel. So that was him home for the day. We live on a plain and are surrounded by hills and the roads were closed.  So we decided to settle in for a nice, cosy day in, keeping warm, watching the telly and drinking warm drinks. How silly can you be? How silly could I be? I knew it was my day off and the GKB was home and the roads were closed, what I forgot was that if we couldn't go out others couldn't come in! Therefore some of the people where I work were stuck at home. On the other side of the hill. Lunch time the phone goes. Diana can you come into work, K can't get here. Yes, I can come in I said, no, I don't want to I thought. But I went in, it's the sort of industry where you need a full team on every shift. That was the end of a relaxing day off. 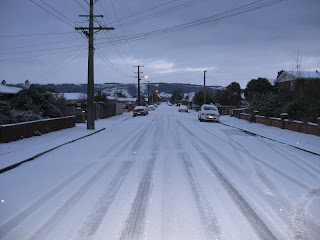 A couple of teenage boys built a snowman in the gardens between the units and the residents thought he was a beauty. I came out of work that evening and the wind had stopped. It was lovely and still - the sky was clear and the stars were all twinkling and I found it surprisingly mild. I just loved it.
Unlike youngest grandson who just hated it. He is 5 and bawled his eyes out and told his mother he was going to get a blanket and lie on the couch and watch videos all day! And he did.
Posted by doodles n daydreams at 22:58