hunkering down again and a trip to the vet

Well here we are hunkering down again for another snow dump. For some reason I'm a bit apprehensive about it this time, the forecast is for snow through to Tuesday or Wednesday. It will be bad enough here, but at least we are on the flat, so will be able to get to places if we need or want to - and of course the GKB will probably be snowed in and I will probably be called in to work again. Oh well, more cash in the holiday fund. 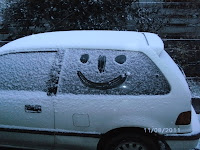 Now the people in Christchurch I do feel sorry for, some of them are still living in cold, damaged houses after the earthquakes. In fact they are being told that if they think they may not be able to cope with the weather, especially as there are  likely to be power cuts, then they need to move in with friends or family now if they can.
Hot soup and cheese rolls would have been nice for lunch tomorrow but seeing as we seem to have finished the cheese rolls, soup and hot toast will have to be the order of the day.
Claude has been sitting looking through the back door for much of the evening. If he had any sense he would come in and make himself at home for the night, but no he is a real outside cat. The only time he tends to come in is in the middle of summer when both the doors are wide open and he can lie spreadeagled in the breeze created in the passage. But, a fortnight ago that changed. He had an altercation with either one of the other cats about the place or with the new powder puff style dog which has moved in next door, resulting in him not being able to weight bear on one of his front feet and a trip to the vet. 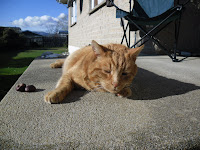 After a slightly fraught trip in the car he tolerated having his ears cleaned, his eyes inspected, his mouth and teeth examined and his coat and skin checked for any unwanted passengers. He really objected to where the thermometer went but short of flattening himself and trying to become invisible he couldn't do much about it. Oh yes, his leg and paw were all inspected too, with a nice shoulder massage thrown in for good measure. Eventually we took him home but not before we were given meds for him and told to keep him inside for the weekend. "Okay" we said. "Oh, and this medication could give him diarrhoea." We climbed into the car, looked at each other and said "outside cat inside for two days with diarrhoea, I don't think so." And when said cat, on arriving home, took refuge under our bed that sealed it. Cars moved out of the garage, old armchair and a dirt box moved in and Claude was a happy camper. He came indoors with us for about an hour every evening and then the caterwauling would start and he was deposited back in his temporary holiday home. All is now back to normal, he is doing his own thing, which includes sitting on the back doorstep, looking plaintively in through the glass until the door is opened for him and then he takes off once more for places unknown. 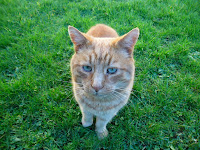 Posted by doodles n daydreams at 00:11