I seem to have acquired some additional furry friends in recent weeks. Well actually Claude seems to have invited some of his mates around to sunbathe at our place. In the summer we have the occasional feline use the passage between our front door and the back door to make its way from one side of the property to the other but I have not seen them just socialising as they have been this month.

I went out the front door a couple of weeks ago and was confronted by a large black and white cat curled up, very comfortably thankyou, in the GKB's deck chair on the front steps  - Claude was stretched out on the concrete just in front of him, both making the most of the warm winter sun. They both just looked at me rather lazily as if I was in the wrong place - and don't disturb us please! So I retreated and left them to it. 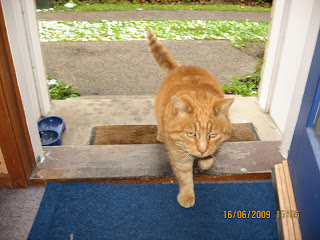 A couple of days later I went out to hang washing on the line and there, on top of the wheelie bin, was a large grey persian soaking up the
sun. Not a silly place to be, lovely fine day, warm plastic lid on the bin, and I'm alright jack. He just dared me to move him as well, but I didn't blame him for making the most of a good thing, if I was a cat I'd probably have done the same.

And that same day a wee calico/tabby cat was around in my pebble garden, lying on the stones, out of the breeze and just enjoying the warmth of the day. Oh for the life of a cat (just occasionally), they eat and  drink when they want, come and go when they want and please themselves about anything they do.

So even though we have had a volcanic ash cloud overhead from the south American eruption for much of  that time it is obviously not blocking out as much heat as I would have thought.
Posted by doodles n daydreams at 23:42