The south of the south 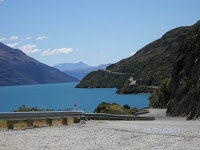 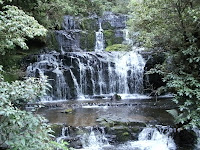 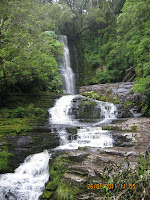 A while since I have been on and written anything, so here goes.
My GKB and I have been gadding about the countryside, first back over to the West Coast and then down around the Catlins area for a few days before heading to Invers (Invercargill to the uninitiated) and then on to Central Otago.
We took Mum up to her sisters 80th celebrations and met up with another sis who had flown in from Aussie the day before. We partied at a lovely restaurant on the Taramakau River, which was absolutely beautiful, but as evening fell the sandflies came out and those of us who had been sitting enjoying the view as well as the beverages were, on the whole, forced back inside. Another great reunion with all the cussies we had grown up with, and more nostalgic thoughts and homesickness from those of us who have moved away and made homes in other parts of the country.
Then it was home and dropping off the mother and the sis and the GKB and I took off for a well earned break without any family or whanau attached to us for a change. We had a great time even if the weather wasn't the kindest to us. Mind you we got sunburnt on the Coast while fossicking for gem stones on the beaches, now all we need is a drum to tumble them in! We saw the penquins at The Nuggets, and because of the heavy rain the Purekanui falls and the Mclean falls in the Catlins were lovely.
We stayed in motels in Invercargill and were shown real southern hospitality by the lovely Indian lady who was our hostess. She brought us freshly baked loaf to have with our coffee when we first arrived and couldn't have been more helpful. After a day looking around the city, H and J Smith's hasn't changed, it is still a great old store to go into, we headed for Central Otago via the Devils Staircase around the lake. Two days later there a was a major rock fall, so we were pleased we went when we did. The lake was a magnificent turquoise colour, hard to describe if you haven't seen it.
At the camping ground each evening we had a rabbit visit, this was the first time in about 20 years of going up there that I have seen rabbits in the camping ground - they must be pretty prolific for them to come in amongst us like that, they are usually extremely timid. We spent a day in Queenstown and then it was time to pack up and head for home.
So now we are back home and back into the workforce, planning for another trip to Japan sometime later in the year, hopefully.

Posted by doodles n daydreams at 00:08