I would like to pay a tribute to my little mother before I go on with my blogging journey.

Mum was named Dawn because she was born as the sun rose one summers morning. She was a frail baby and was sustained by my Grandmother  massaging her with olive oil several times a day until she was strong enough to tolerate some condensed milk. And this she lived on for quite some time. In spite of all this she was a happy child and her father always called her smiler. She was always a battler, she had to be. She married young but by the age of 22 was separated with four children under the age of 5 - one set of twins there :) Later she remarried and 2 more boys were born and we were a happy family.

Mum supported all her kids in their sports, clubs, dreams and hopes and enabled us all to pursue the careers of our choice, even though at times it meant some hardship for her. She  had no favourites but woe betide any daughter who dared to criticize one of her sons! Mum dearly loved all her grandkids and her great grandkids and was proud of them all - she always said the only thing wrong with the kids was the adults with short memories.

Mum enjoyed knitting, sewing, baking, jam and pickle making and was good at it all, kept us all well clothed and fed :) A real homemaker. She put down her knitting needles for the last time in her late 70's after knitting an intricate shawl for one of the new babies.

Later in life she began going to church and developed a simple but deep faith which carried her through until the end. She was involved in children's ministry as well as other facets of church life and made some close friends there.

We will miss you Mum, your smile, your advice, your passion for the things you believed in, your chats, your stories. But most of all we will miss you.
'Til we meet again. 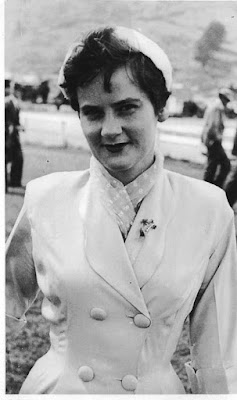 Mum in her mid 20's, a day out at the races with Grandad.
She made the coat and the hat herself :) 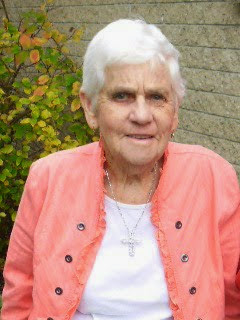 A year or so before she became ill, dressed to attend the Cathedral service with the Duke and Duchess of  Cambridge attending.

I would also like to thank you all for your kind remarks on the previous post, I have appreciated them all.
Marcia, yes unfortunately Mum picked up the blood infection while she was in hospital for a short visit.

Posted by doodles n daydreams at 12:45