preparing for a reunion

Just over two years ago my little mother's sister died and so of course there was a family gathering at the funeral. Afterwards we had a 'family only' gathering at one of the cousins homes where it was decided that we needed to get together for a happy occasion for a change and just enjoy each others company. Who to organise it we all wondered? 'Well Diana, you are the only one here who is retired so you could do it'. Silly me, in the excitement of the moment I said yes.


There were six siblings in Mum's family, one boy with five sisters. Two families in a way as the first world war interrupted family life as it did for so many. Only my little mother and her younger sister are left and unfortunately they are both in indifferent health. Little mother will be unable to attend as we need to travel and my aunty will attend what she can, if she can. We are going back to where most of us grew up - HOME :) 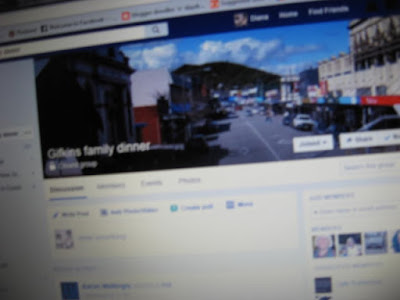 Eventually we formed a committee of sorts which made decision making easier (and didn't leave me with all the responsibility).
So...where to start? Put up a facebook page someone suggested, then we can all chat. So I did and we did. It's been more and more fun as more people joined and started sharing some of their old photos and making suggestions. And contacting each other again. Some of us haven't seen each other for over forty years. And some of us are still to meet. 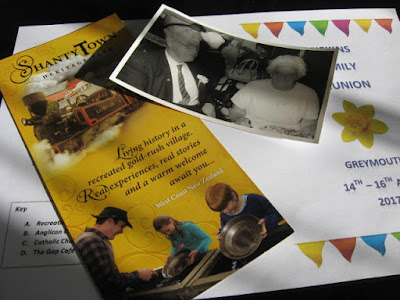 A venue was decided on and just a month or so back the menu was agreed. I made up a welcome pack and that was sent out a month ago. We have people coming from Japan, Indonesia and Australia as well as around New Zealand. We decided to try and get a group concession for Shantytown, which is a replica pioneer village just a few miles from where we are gathering. Family friendly and the kids of all ages can see how our grandparents lived, ride an old steam train through the bush and go gold panning. I think it will be a bit shocking for some of the youngest generation - no electricity, no ipads, long drop toilets :) Oh well. This is still a work in progress, the concession seeking, but I delegated that job to one of my sisters. 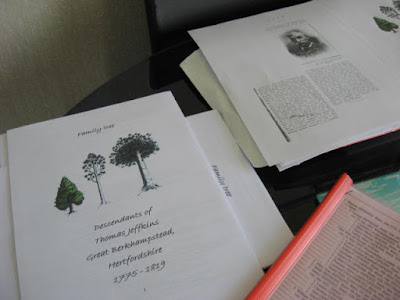 As a surprise I have printed off copies of the family tree and will give it to each family at the meet and greet on the Friday night. It dates back to 1775 and covers 8 generations with another 2 or 3 generations at this end to be added in. No I didn't research it, another family member did and I'll give her the credit on the day. 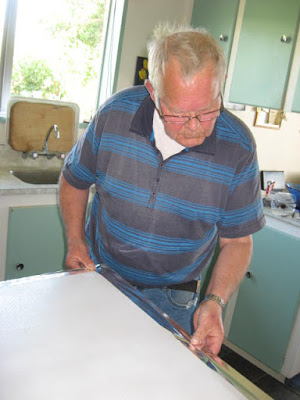 We have been sorting photos and asked people to bring their own or any items they might think will be of interest to the rest of us. My GKB has been making a photo board and this is him working on
PB Mk1 or photo board mark 1. I think it is on it's third incarnation at the moment. That's okay, it'll be done in time. All we have left to do is print some photos and get ourselves over there with our carload of gear.

I'm looking forward to it but have to admit there have been times that I've felt quite daunted and overwhelmed, but that is all behind me now :) So it's almost time to relax and just go with the flow.

Posted by doodles n daydreams at 21:05