Last weekend my GKB and I made a flying visit
to Christchurch to visit an old friend who is ill.
While we were there we caught up with our eldest grandson
who took us into the city centre to have a look at
how things were progressing since the earthquakes in 2011.

A container mall has opened up where there used to be high rise buildings and it is rather a nice place to be. I thought it was a good example of thinking outside the square when it came to getting some of the businesses up and running again.
It had been rather eerie walking among the damaged buildings and seeing cordoned off shops with their goods still all on display!

What I really want to show you today though,
is ChristChurch Cathedral.
My GKB and I were there just 12 months earlier
and took photo's inside the cathedral as well as out.
Here are a few of the before photo's.

As you can see from the scaffolding,
repair and restorative work was going on. 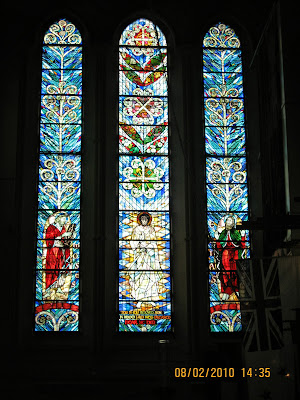 My grandson and I went for a short walk, left my GKB and grandsons friend to chat as my bloke's sore leg was playing up.
He took me for a walk around the cathedral,
starting on the south side and then around the back.


I didn't think it looked too bad, all things considered.
I could understand why there is a large group
of people wanting to restore it to it's former glory.
Then we came around to the western side proper.
That was a different story!

It is quite devastated,
(grandson related it to being like a medieval ruin),
and now I know why another group of people
want to push it  over and build anew.
There is quite a controversy about it and it's a real dilemma.

ChristChurch Cathedral was the heart
of Christchurch City, which is why there
is such an emotional reaction to it being pulled down.
I hope they find a solution that will
make most of the people happy.

Have a wonderful week,
till next time,
Diana

Posted by doodles n daydreams at 16:51