Feijoa and other stuff

Today I have been brave and made feijoa chutney. Only a small amount because I wasn't sure how it would turn out. And after last years disastrous attempt at feijoa jam I thought I'd go slow and easy. It looks pretty good but the proof will be in the eating. I'll give my little mother a small jar to try, she's not too keen on the fruit but might enjoy it made into something different. Apparently it tastes a little like pineapple, but it's not like any pineapple I've ever tasted. Wikipedia says it is a type of guava native to South America. I think it is an acquired taste, unless you grow up eating it, which I didn't. I do enjoy it a little more each time I have it though.

The weekend has been busy, starting on Friday night with an outing to 10 pin bowling with the youth group and then a craft afternoon and fish n chip tea with the Sunday school kids on Saturday. That was a lot of fun but very tiring. Sunday School yesterday and today was a day at home. Just mucking around doing what I wanted when I wanted. 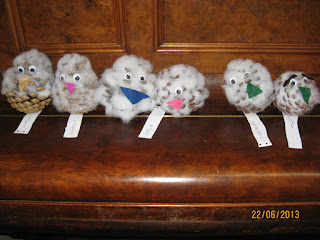 I just love this picture of the snow owls the kids made. They are all so different and so expressive. As it was the night of the Matariki lantern  parade in town we also made lanterns and after tea tested them out so that the parents and kids could see how they had turned out.  They were really effective in the  dark but  my photo didn't turn out so, sorry, I can't show you. There is still a lot of this white stuff hanging around making it very cold and yukky. You may guess that I am a warm weather person. A few days before this dumped we had torrential rains for over 2 days causing floods and slips nation wide.  Bridges and roads were washed out and people evacuated from homes where the ground was falling away under them. We had one day reprieve and then the snow started. After 3 days of non stop snow moving up the country people have again been cut off and there have been more road closures, slips and power outages. Over a metre of snow has fallen in some places and while that is good for the snowfields it is a disaster for the farming community. Here where I live on the Taieri Plain it never settled on the ground and while that made me happy it meant the kids didn't get any snow days from school and were very disappointed. I just think we were extremely lucky when I see what has happened elsewhere.

And just to finish, here is a shot of the so called super moon, through the trees and as the clouds parted briefly earlier this evening. 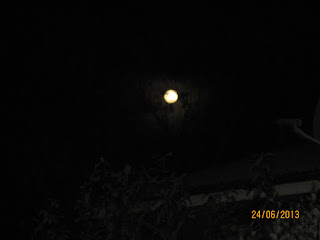